Custom Enchants are all new, unique enchants that you can apply to armor and tools, which play a major role needed to progress. 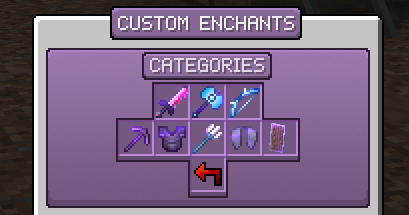 Custom Enchants can be purchased with money from /shop under Custom Enchants. They can also be obtained at random from Enchanting Tables, Villagers, Dungeons, Crates, Fishing, Drops, Daily Rewards, and Events.

You can quickly open the Custom Enchants menu with /shop ce.

Custom Enchants can be applied to items by using an anvil, similar to vanilla Minecraft.

Some enchants may be incompatible with another enchant, preventing you from applying them together on one item. You can check if an enchant has any incompatibilities using the /whatis <enchantment> command.

Custom Enchants can be combined together, following the exact vanilla Minecraft rules. For example, if you had two Dodge I books, the result would be one Dodge II book.

Below are the various types of Custom Enchants.

Beware that you can only apply one special enchant on an item!

Spell enchants (Blue) are enchants that require manual activation (right-click). They have a cooldown upon activation.

Various Custom Enchants have different rarities. They range from common, uncommon, rare, epic, legendary, special, and very special. The higher rarity an enchant has, generally the more powerful it is, and the higher the rarity.

You can easily look up all about an enchantment by using the command /whatis <enchantment>. This will tell you what the enchantment does, the max level, and what it can be applied to.